In 1985, six crewmembers on board the Soviet Salyut-7 space station witnessed something incredible.

The ADG UK blog has posted an amazing recap of angelic being visiting astronauts and seen by satellites. 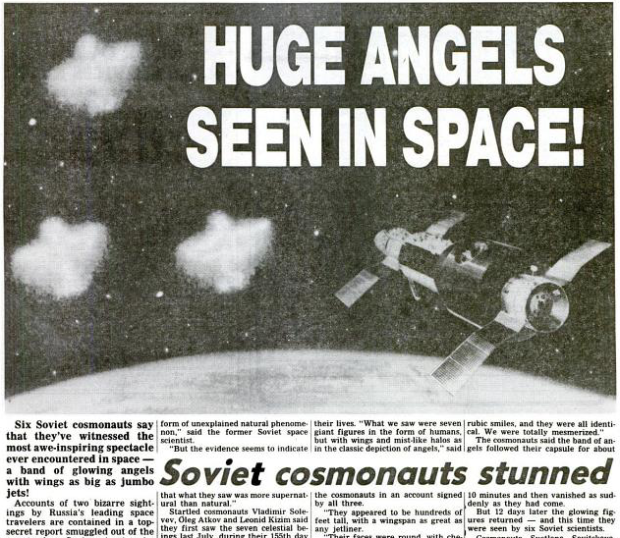 A flash of bright white light blinded all the cosmonauts on board for a short time. After a few seconds when they could see again, the cosmonauts saw silhouettes of seven figures outside the station.

The silhouettes looked like humans, but were huge, at least 90 feet. They also had large wings and luminous halos above their heads, the creatures looked like angels.

They were glowing, they reported…

“We were truly overwhelmed.”

“There was a great orange light, and through it we could see the figures of seven Angels.”

The Angels kept pace with the space station for some 10-minutes before vanishing.

Later in the mission, some 167 days later, the crew were joined by another three cosmonauts from the Soyuz T-12 spacecraft: Svetlana Savitskaya, Igor Volk and Vladimir Dzhanibekov.

Shortly after joining them, the Salyut 7 was once again visited by the Angelic beings. All cosmonauts on board the Space Station related the same story, in detail, and all were profoundly moved by the experience.

After this strange incident occurred,some of the crew stayed on the vessel for another 237-days

Safely back on Earth at the end of their mission, all the Cosmonauts were subjected to vigorous psychological and medical tests, which found no abnormalities at all.

The incident was quickly classified Top Secret by the Soviet Union, and the entire crew were cautioned never to speak of the event publicly.

Many US astronauts on board NASA’s space shuttle, and the International Space Station have also encountered angel-like beings, and strange creature’s while on missions. As with the Russan encounter, Astronauts are unable to relate their experiences, under the threat of death in some cases.

Since its launch on December 2, 1995, SOHO, the Solar And Heliospheric Observatory, has caught many Angel-like objects during its observations of the Sun.

NASA claim these are just image artifacts or errors in the image processing. The evidence however is overwhelming that Extraterrestrials exist, and come in many shapes and sizes.

From small space critters to massive unexplained space-craft, NASA is deliberately withholding important information about our place in the Cosmos, and more importantly who we share it with.