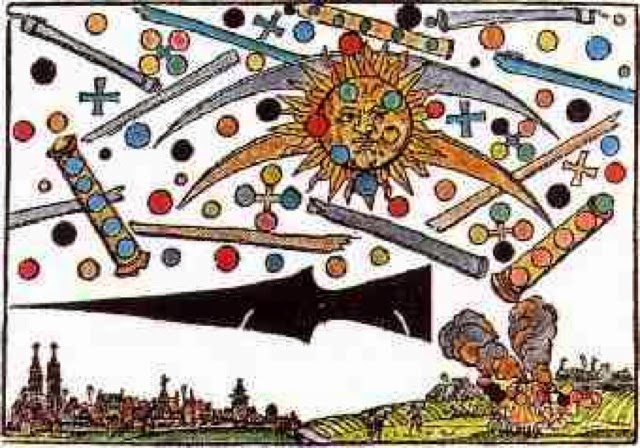 In 1561, Hans Glaser documented a strange event on a woodcut for the German Nuremberg Gazette described as hundreds of crosses, globes and tubes fighting each other above the city. Some of the objects were reported to have disappeared into the sun, and others into a thick cloud of smoke after crashing into the ground. Many were said to witness the entire spectacle along with the appearance of a black, spear-like object after the battle. According to the accounts, not only did people of the 16th century witness what seems to be a UFO sky battle, they were also able to distinctly tell which side was winning.
Coupled with the occurrence in Nuremberg, five years later in 1566, citizens of Basel Switzerland witnessed a similar spectacle involving several black orbs engaged in sky battle above. The people of Basel also recorded the event in their city gazette with a woodcut that cannot be traced to a known artist. Accounts claimed the black orbs would sometimes turn red and fiery before fading to nothing. Science suggests these events were the result of meteor showers and comets as the most logical explanation, yet the people of Nuremberg, and surrounding areas, described the sighting as something completely out of this world. These events were significant enough to be featured in news woodcuts, which undoubtedly were talked about for years after happening. The fact that people believed a battle was taking place in the sky above, involving a number of differently shaped objects, makes it difficult to understand this mysterious phenomena as simply comets or a meteor shower.