Chiron Last : We are the “scapegoat” being punished for someone else’s errors 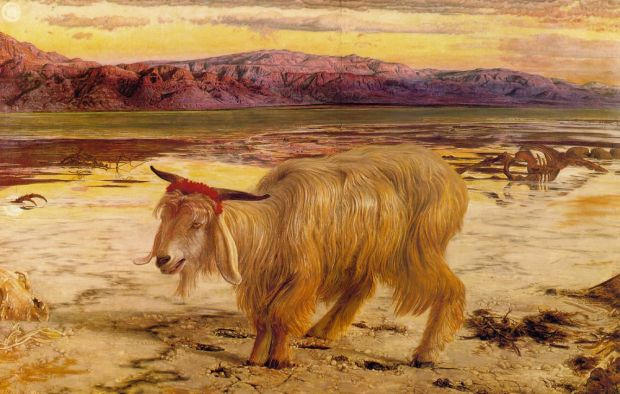 The Scapegoat by William Holman Hunt

From where we are in this galaxy,

to the enormous implications of commerce,

to the remedy of awareness, and much more

Selene is once again the moon as depicted in the Greek mythology whereby she was identified with the Roman “Luna.” Azazel, on the other hand, is the evil spirit mentioned in Leviticus 16:8 with the Hebrew ‘azāzēl’ translated as “scapegoat” while in the book of Enoch (1 10:8) it states that the ‘ăzā’zyēl was one of the main members of the “Grigori” – otherwise known as “The Watchers.”

In the Leviticus passage, it states that there are two “goats,” one is the LORD and the other is the “scapegoat” which I take to be the Pineal gland and the Spine seeing that the word name Azazel is linked with the Latin ‘Azanius’ meaning “kind of pine cone” while the word “scape” is an architecture term for an “upright consisting of a vertical column” which is again indicating our spinal column. “Scape” is even derived from the Latin ‘scapus’ translated as “stalk, shaft, upright of column.” We are the “laughingstock” of the gods seeing that a synonym for “goat” is “laughingstock” and “stock,” as was indicated in the video, is also known as “broth, gravy, soup, right, law” from the Latin ‘jus.’

We are the “scapegoat” being punished for someone else’s errors and constantly lied to, because even the word “law” is etymologically rooted in the word “lie.” “Law” is from the  Old English ‘lagu,’ of Scandinavian origin that is akin to Old Norse lỏg meaning law which is cognate with the Old English ‘licgan’ meaning “to lie.” The Old Norse ‘lỏg’ gives us the clue that this is indicating the “log” known as our spine which is why the controllers get us to “LOG in” to our various online AC-COUNTS. It also reveals the fact that a ‘lawyer’ truly is a “LIE-yer.” Do I think that bands such as Rush “understand” what they mean when they put pentagrams on their album covers with indications of certain biblical verses?

If they do not, they certainly provide enough symbolism to indicate that they most certainly do. Not that I’ll do an extensive analysis into that particular album, but their one song, “The temples of Syrinx” most certainly is indicating the “goat god” Pan since a syrinx is exactly that – a panpipe, because the TEMPLE is the SEAT of the soul (pineal gland) with the “Pipe” of the spine that is being “played” by the goat god Pan. We are being “played” in this “Game of Life” and the symbol of the Pentagram on their album cover indicates Pan, Baphomet, Samael, Lilith, otherwise all known as the Goat of Mendes or the Sabbatic Goat.

It is the “Sabbatic” goat of the Black SABBATH – the dark sun/son we know as Saturn. Saturn binds us, as you have said, to the “Serpent of the seas” which is the serpent of the waxing and waning moon cycle. The moon “seas/sees” and will “Sieze” the dead to bring them to the ‘HEX-a-gram’ of Saturn which is the “base 16 (bit)” operating system as shown by the French ‘seize’ meaning “16.”

This is why all measurements, whether in music, architecture, clothing manufacturing, cooking,  technology, etc. are designed to work themselves into derivations of 16 (4, 8, 16 etc.) “They” want all music to be in 4/4 time signatures since 4×4 = 16. “They” want all stud centers in housing construction to be “16” inches apart. The examples go on and on. It is all to keep the design construct of this matrix “fair and SQUARE” so that everything works within the coded wavelength “pattern.”
As for the newspaper clipping at 37:56, this is from a series of Newspapers called “Lucifer, The Light Bearer” that was founded by Moses Harman. This newspaper eventually came to be called “The Eugenic Magazine” since he helped found what became the eugenics movement.

Here is a link to some of those issues; https://archive.org/details/LuciferTheLightBearer.

There are enormous implications as to the direction that this is all going, which will be explained in the next work.

← YELLOW ROSE FOR TEXAS UPDATE : they planned to keep some of humanity to have a food source
CHIRON LAST : GALACTIC SYSTEM … Law of the Sea … AND SPACE →

3 thoughts on “Chiron Last : We are the “scapegoat” being punished for someone else’s errors”